The children whom I see once-a-week in an hour-long afternoon science enrichment class show growth in their exploration of building using ramps and blocks to create pathways for balls. These materials have been available each session for about four months. An hour once a week is not much time to explore a set of materials but the children seem to be able to pick up where they left off the last time. They enjoy making the balls go into a goal, creating elaborate structures around a few ramps, and making especially long ramps. 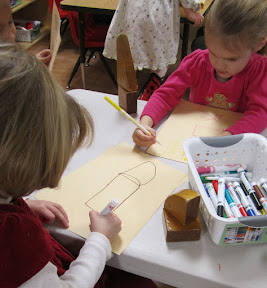 Their work had seemed stalled so I assigned a task before building. I wanted to see how the children, ages 3.5-5, would approach the difficult task of drawing the relationship between two 3-D objects so I asked them to make a set-up with any two wooden (unit) building blocks and draw a picture of it. Most of the children made simple line drawings of one face of the blocks with varying degrees of accuracy (some were more oval than rectangular), and a few children traced the shapes. I hoped that this practice drawing would help them begin to think of how 3-D objects can be placed together and that thinking before building might lead to new structures.
(Note: In talking with the children I was searching my brain for the name given to the rectangular block and couldn’t come up with it. Not a cube but a ________. An online resource, The Annenberg Foundation’s Interactives: Geometry 3-D Shapes, gave me the word I was looking for. These unit blocks are polyhedrons, 3-D shapes whose faces are polygons, and specifically right prism polyhedron because the opposite sides are equal and they meet at right angles. The general term “rectangular prism” is appropriate. The site has a cool section where these shapes are shown unfolded.)
Nora S. Newcombe’s article in the Summer 2010 American Educator, Picture This: Increasing Math And Science Learning By Improving Spatial Thinking, has a fascinating discussion about spatial thinking skills and how to improve spatial thinking with some simple techniques. Newcombe asks, “Since spatial thinking is associated with skill and interest in STEM fields (as well as in other areas, such as art, graphic design, and architecture), the immediate question is whether it can be improved. Can we educate children in a way that would maximize their potential in this domain?” “In addition to practicing spatial thinking tasks like those shown in the box on page 30, well-conceived symbolic representations, analogies, and gestures are also effective in improving one’s spatial thinking ability.” She describes a study that shows that parents using spatial words like outside, inside, under, over, around, and corner help preschoolers improve their spatial thinking. Although “precise answers are not yet possible,” Newcombe says, “However, we are beginning to have some good ideas about where to start, especially with preschool and elementary students.”

A young child drew and then referred to this drawing as he built...

Last week I challenged the children to first draw a ramp set-up that included at least two ramps and two blocks, and then build it. There were also sponges and plastic quart containers available. The children got to work drawing, some rushing to finish and some working more methodically. As they finished, they picked out materials and began building. Most of the 14 children referred to their drawings as they built, whether or not the structure closely matched the drawing.

....resulting in this structure.

One child announced that, “Mine’s not working!” I asked the group, What should he do?” and they responded, “Make a new plan!” He did. He went back to the table, re-drew his plan and then built a revised structure (which he was happy with) and continued working with for another 30 minutes. Two of the youngest children did not wander as they often did but spent the time engaged with building and ball-rolling. Another child had drawn a bridge-like structure with an up-ramp, level section, and a down-ramp. He tried to build it but could not get it to stay up. When I asked him what he wanted to do, he pointed to his plan indicating where he needed two supporting blocks. With a marker he drew in the supports, and then got two blocks to successfully build the revised structure.
To learn the most out of this activity, the children need time to investigate the relationship between the blocks, the slope of the ramps and the size and weight of the balls. They need time to play—did the ball make it into the hole?, time to compare—the heavy ball bumped off the path here but the light one kept going, time to think and talk about why, and time to revise their structures—“I’m going to make it better this time!” By designing, discussing their ideas, building, and revising their designs, I hope the children will gain experience with physical science concepts of force and motion while developing their spatial thinking.
Peggy
This entry was posted in Early Years and tagged activity ideas, assessment, early childhood, ramps, shapes, spatial thinking. Bookmark the permalink.